Quick Video Walk Through of My Amazing Easy to Use Plant Based Meal Planner...

The Plant Based Meal Planner

Get started with our three easy steps

Takes less than two minuets. Your info allows me to customize recipes to meet your goals.

After we analyze your tastes and preferences, you'll have the option to choose your meals.

Tasty and nutrient rich recipes for you to enjoy every single day!

I can't cook dinner for you, but I can plan and send your grocery list to your favorite store so they can deliver to your doorstep all the ingredients you need. 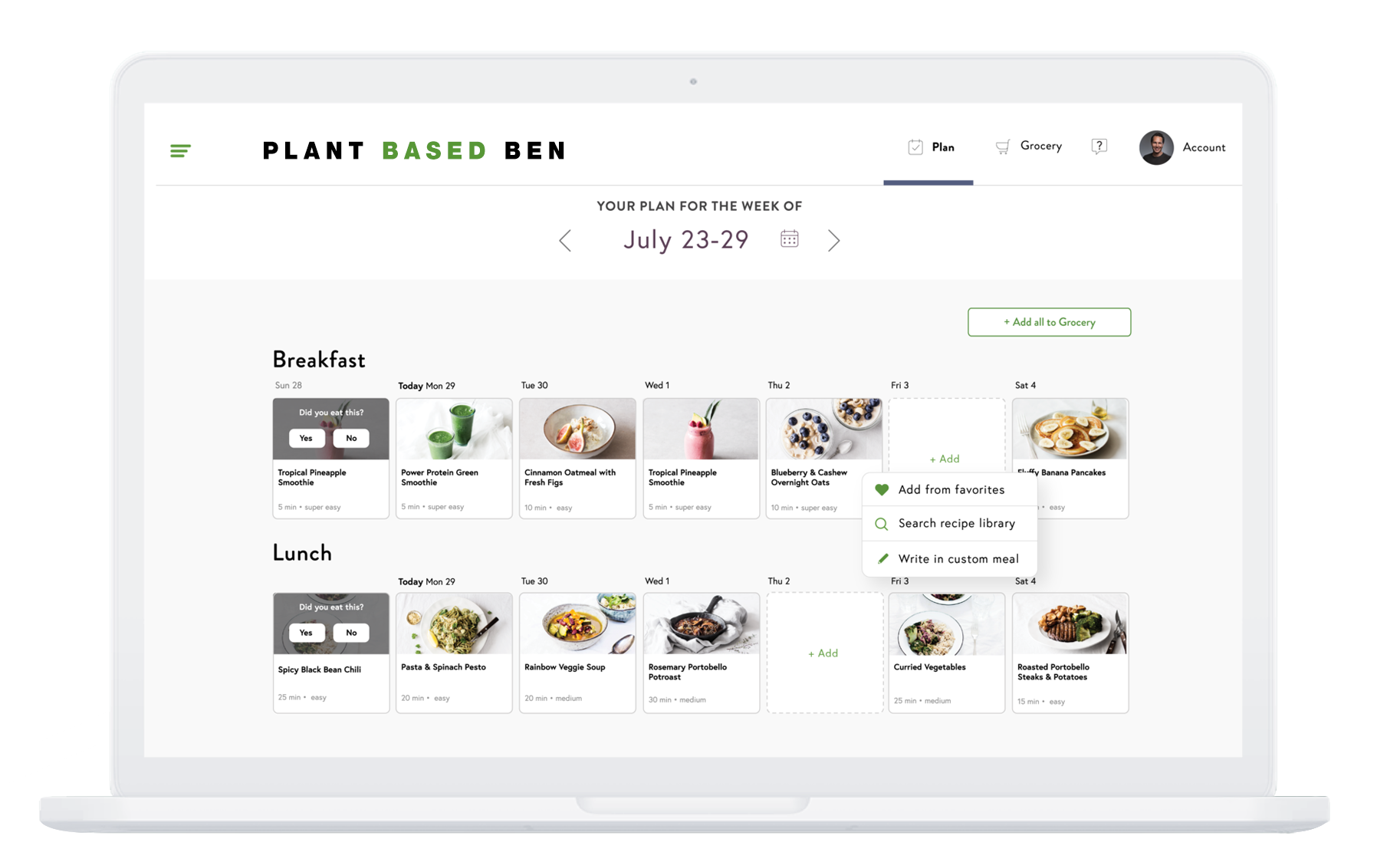 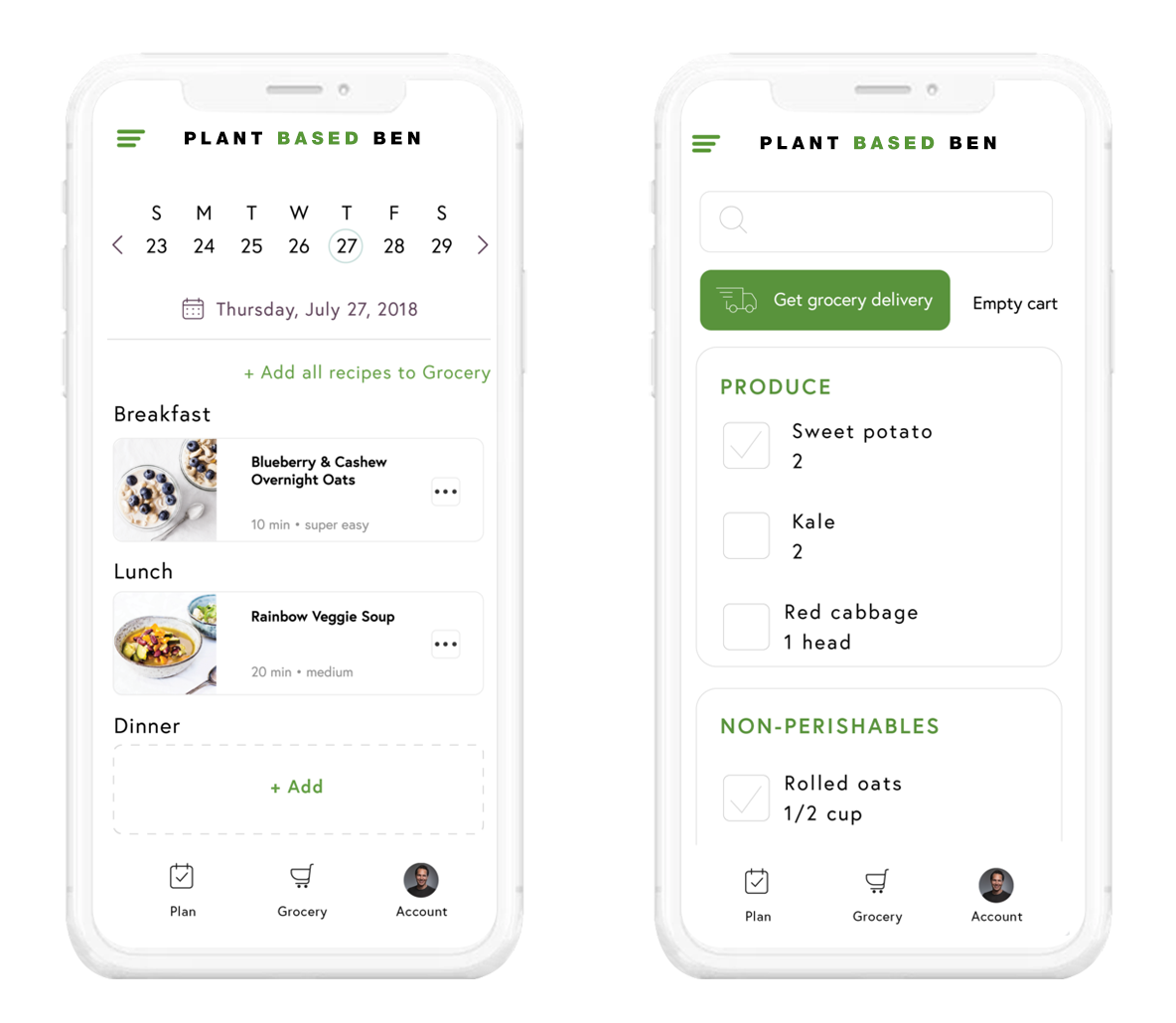 About Ben Raue aka "Plant Based Ben"

"Anything is possible with a clear purpose, plan, persistence, and plants!" ~Plant Based Ben 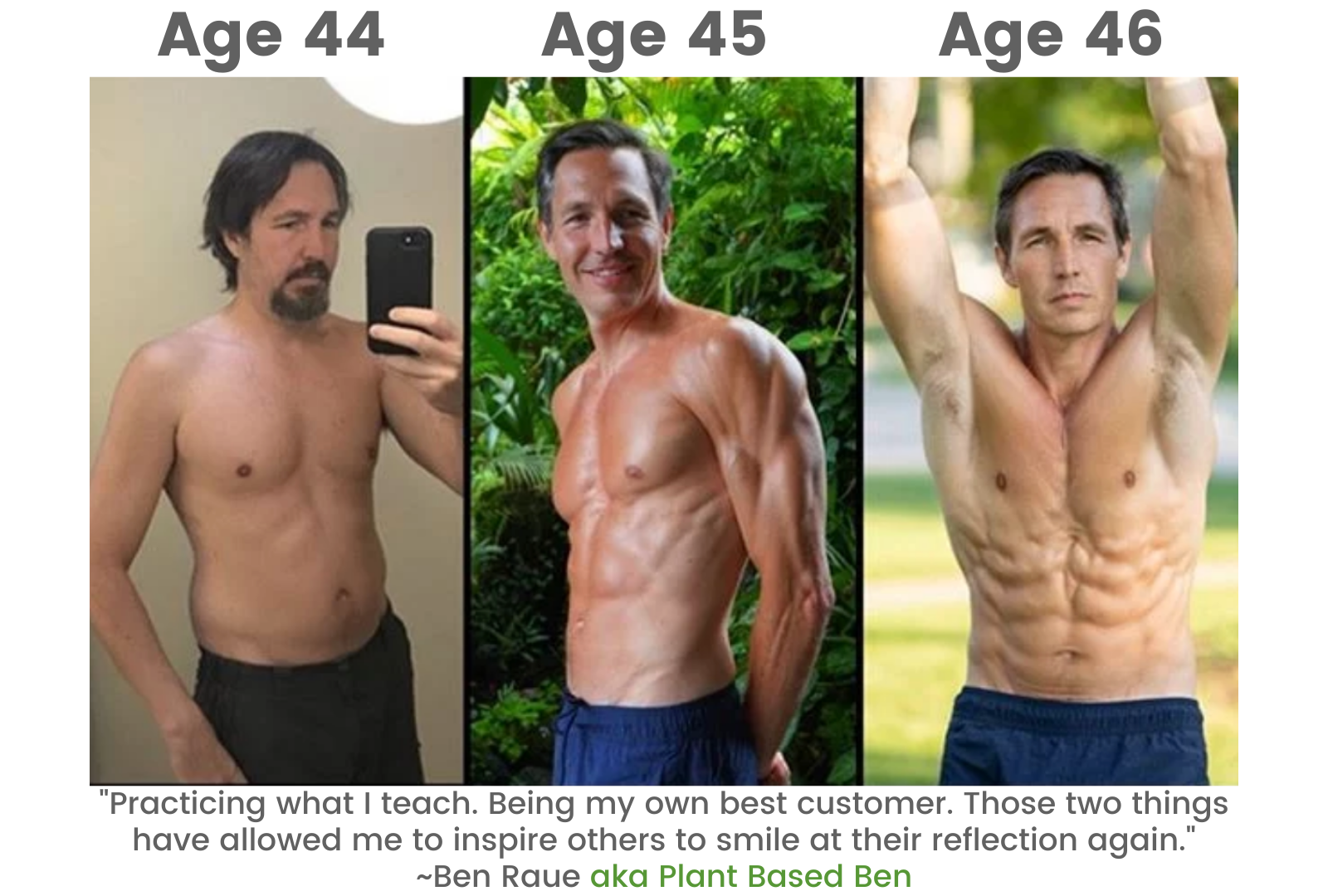 My name is Ben and I go by 'Plant Based Ben' online!
I help men and women become the best versions of themselves by adopting a healthy plant based diet.
I have been vegan for several years now, for my health, the animals and our planet.
My life changed so profoundly and I wanted to share what I've learned with others. 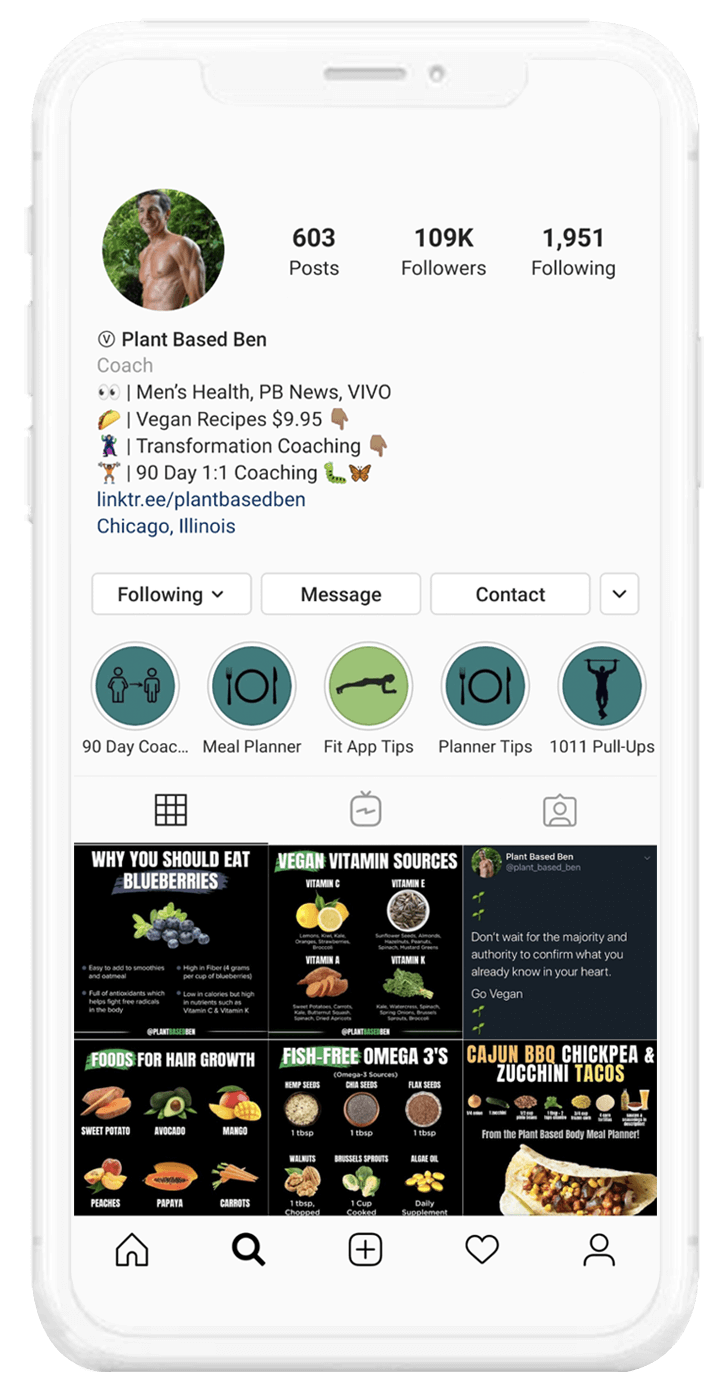 I wanted to do something to help the planet, but after graduation found myself a bit discouraged since there were few job postings saying “Planet Savers Wanted.” The pressures of getting a job and paying off some debt lead me to a corporate job. I didn’t want to let my vision go but I thought I might have to find a different route.

Fast forward about 8 years and I was a business owner of a small employment outsourcing company. The accumulated years of not really contributing to something I was passionate about, was adding up. I didn’t feel I was making a real impact in the world. I needed a mental and physical detox from my 12 + years of the rat race and unhealthy habits. So, I broke the golden handcuffs and decided to spend the next few years focusing on deep meditation and personal development.
I was fortunate enough to be mentored by a meditation coach who wrote Meditation for Dummies. Around the same time I ended up studying and receiving certifications in hypnotherapy, personal training, lifestyle and weight-management consulting, and basic nutrition. I ended up using these tools to quit smoking, lose a little weight, and manage stress. I wanted to help others make the same positive changes so I started working as a coach.
Shortly into this new career, my father was diagnosed with a rare form of lung cancer. He was given a 10% chance to live 2 years and a 2-3% chance to live 5 years by his first oncologist. When asking the oncologist about nutrition, he replied, “keep him away from raw foods and vitamins.” We were out the door, skipping what should have been his first day of chemotherapy. My father’s grim diagnosis put me on a quest to dive full-time into researching alternative and integrative health therapies. Through the research, we found an Integrative Oncologist who combined both conventional treatments and a nutrition-based protocol.
Fascinated by the field of natural healing, I continued my search, interviewing over a half a dozen MDs and PhDs specializing in alternative cancer therapies. In addition, I had the good fortune to meet and interview “terminal” alternative cancer survivors who were alive a decade plus after their diagnosis. These interviews, in combination with months of in-depth research, opened my eyes to a whole new understanding of healing. I knew that I wanted to share what I learned and someday help to spread this information far and wide. And my father? He is still kicking 6 ½ years later! Although we have no way of knowing the role the more holistic nutrition based protocol had on my father’s full recovery, something allowed him to beat the odds.
Once my father was back on track, a personal burnout settled in. I ended up traveling extensively on and off for a few years through Thailand, India, and Central America to continue my meditation and self-enquiry practice. I found myself meditating 3-6 hours per day and attending numerous meditation events and workshops. There were many moments of deep peace throughout these years; however, living a semi-monk-like life didn’t seem to be addressing the external environmental, health, and human rights issues. There was a piece of me that was unsettled by solely focusing on inner growth but not taking action externally in the world.
About six months back, I rewatched the documentary What the Health, which ignited a spark in me and made me want to clean up my eating to more of a whole food plant-based diet. I also rewatched Cowspiracy, which brought back to mind the extraordinary impact animal agriculture was having on human rights, rainforest, species extinction, climate change, ocean dead zones, and more.
Refueled by these documentaries, I signed up for a vegan fest in January of 2018 in Tulum, Mexico. This event had vegan-fitness professionals speaking, including Nimai Delgado, Dominick Thompson, and Torre Washington. They were the perfect of examples of “being the change you want to see in the world” and promoting a lifestyle that was not only impacting lives, but creating a revolution that is impacting the environmental and human right issues. This was my “aha” moment. I decided to also become the change I wanted to see in the world and dedicate my time and career to promoting a vegan diet, for the people, the planet, and the animals. My first step in the journey? My 90-day health and fitness transformation.

Personalized meals to meet your health and fitness goals.

Easy to make and budget friendly recipes so you can save time and money.

Nutrient dense meals to ensure you get all the vitamins and minerals you need.

Over 2,000 vegan recipes worth sharing. 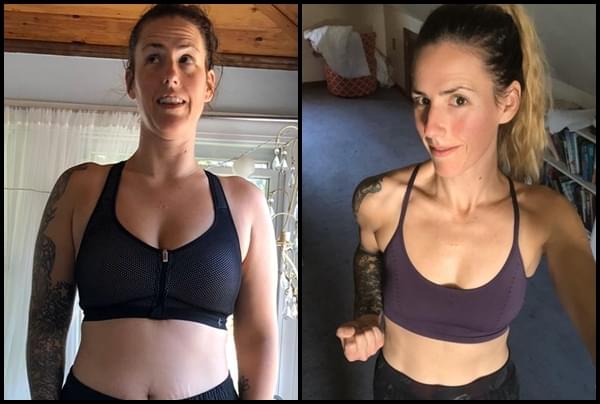 "Ben's meal planner and his coaching has been an absolute game changer. The meal planner is simple to use, has a ton of options, and the food is delicious." 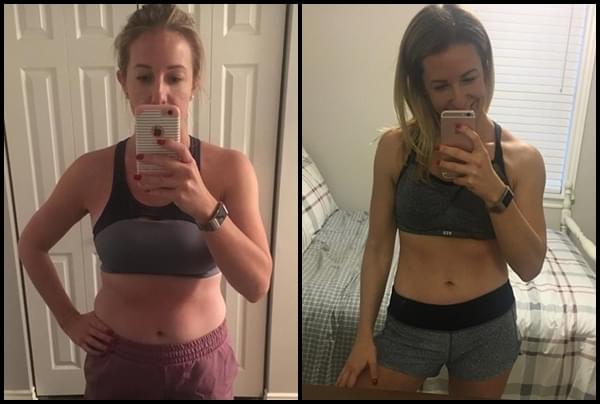 "I used Plant Based Ben's Meal Planner throughout my 90-Day journey, and I still use it! I'm absolutely in love with it." 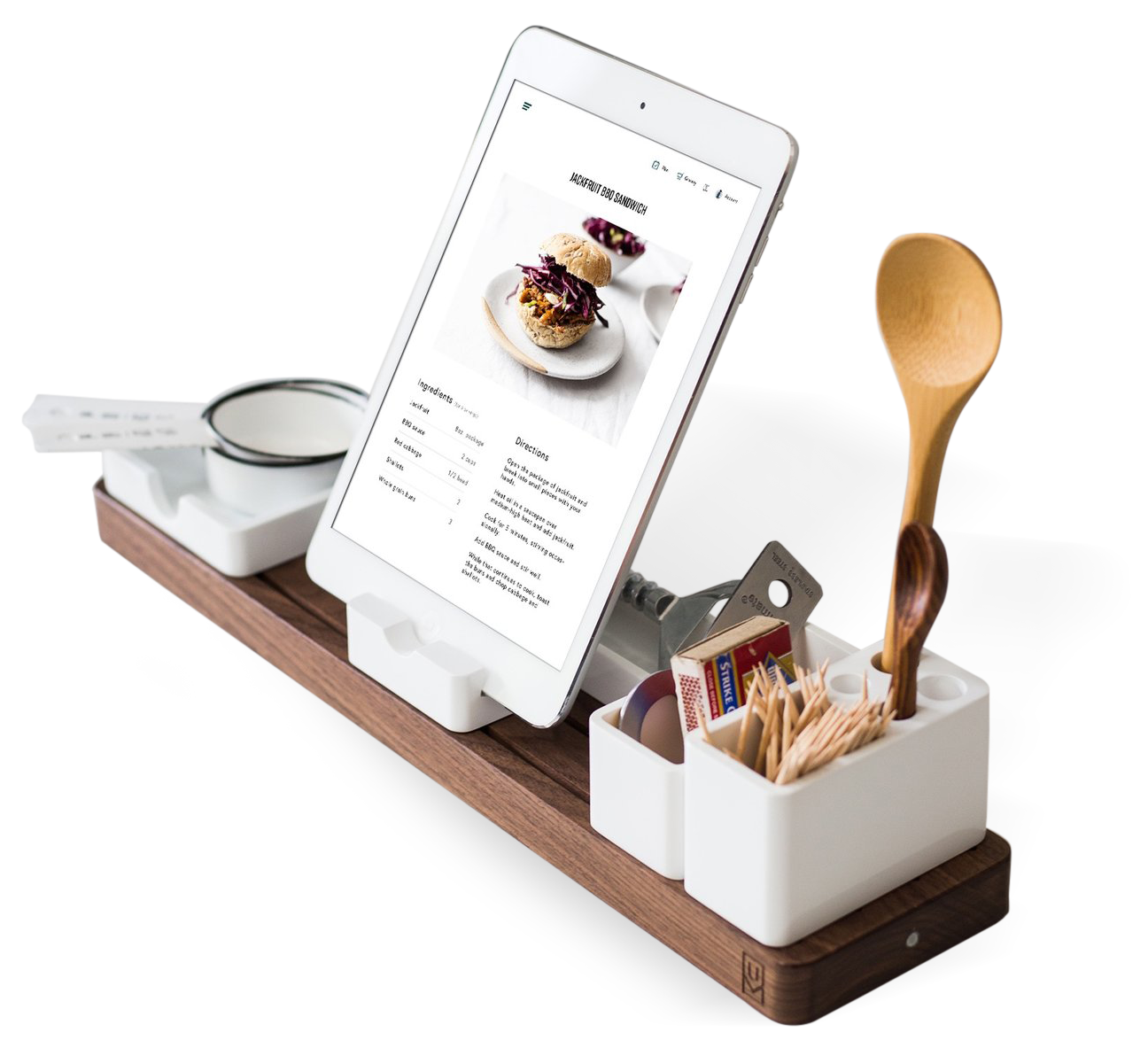 Q. Is the Meal Planner an App?

A. You can use the Meal Planner exactly like an app. It’s available on any device via a web-based app. I will give you a video tutorial of how to use it once you purchase it.

Q. How Much Does It Cost?

A. For only $14.95 you get access to thousands of recipes every single month. You will also receive full nutritional info for the recipes and the ability to print out your personalized recipes at any time! Members continually save more money by following the recipes and grocery lists provided within the app.

Q. Is The Planner Easy To Use?

A. Simple! The planner is very simple to use. Once you sign-up, I have a 2 minute questionnaire for you to fill out so I can understand your goals and adjust your meal sizes to the optimal proportions for you!

Q. What If I Don’t Know How To Cook OR I’m Just Too Busy?

A. You can set the planner to “Beginner” and “Under 10 Minutes” so you’ll be given easy to follow recipes. These will give you the most time effective recipes so you can spend the shortest time possible, in the kitchen! (and more time doing things you love)

Q. Is This a Long Term Contract? How do I cancel or upgrade?

A. There is no contract. The meal planner is month by month. If you pay by credit card, you simply cancel by going to our cancellation page and can cancel instantly. If you pay through PayPal you can cancel directly via your PayPal receipt/notification you received when signing up or through logging into your PayPal account and managing your subscriptions. However, I do not provide refunds after the month’s payment has been made as you still have access to our full library of plant-based meals. If you have any challenges or questions contact us at support@plantbasedben.com

© Plant Based Ben, All Rights Reserved